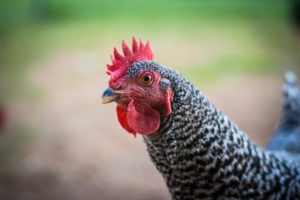 This is a story about my little black speckled headed hen, Star. My name is Nina, I started looking after hens about fifteen years ago. A friend of mine, Pia, sadly passed away, leaving her animals behind. She had cows, a dog, cats, chickens, and geese. I used to go and help Pia on the farm twice a year. Her family lived in Italy and had no interest in the animals or farming. They just wanted the place sold and gone. I decided to adopt the beautiful young collie dog Sally, five hens, a rooster and Kitzi, a sick kitten. After the funeral I piled all the animal into my car in West Cork and drove home to Dublin suburbs. Was I fecking mad? Or what!

I wasn’t a bit prepared. I live in a corner house, with a big enough garden. When I got home, I emptied out a shed to make room for the chickens to sleep in. I had taken some food for them from West Cork. They were great and seemed to settle in well. The cat and dog stayed inside with me. When you are in the country with the animals you don’t notice their habits and noises so much. But Jesus! I leapt out of the bed at five am, when the rooster crowed, cock- a- doodle doo, lifting the roof off the shed. ”Oh my God! The neighbours, they will go fecking mad!”  But I was wrong, when I went and asked the nearest ones if the noise was too much, the older ones said they loved them. It reminded them of their home in the county. The dog Sally rounds up the chickens like sheep, when they fight, she walks in-between them to stop the squabble. Little kitten, Kitzi, is very small even now at eleven years. The chickens are magic to watch, they have a pecking order especially around food. The rooster would find food and call the hens, the top hens eat first. They would pick at the other ones to let them know who is boss. The same in the evenings time when it’s time to roost the hierarchy get to sleep up the highest. Then there are the beautiful fresh eggs every day, different colours, blue, white, brown, and cream. One day I went out to get the eggs, there was a hen sitting outside. Ah she is laying an egg I thought. A couple of hours later she was still sitting. When I went to her, she could not stand. Not sure what happened, I didn’t bring her to the vet, as I had with others when they were sick. The vet usually euthanized them, or they would die shortly after they got home, within a day or two. Vets being sometimes even more expensive than a doctor. The pet shop said give CBD oil for animals a try, it’s great. So, I did for a few months, she thrived on it. But she never walked again.

Now after nine months, she is a house pet like the cat and dog. She is called Star, because of her speckled head. She is good company and funny, when I come down in the mornings, she chirps away just like a budgie only not as long. Then when it’s time to bring Sally the dog for a walk, I tuck Star under my arm and off we go, sometimes Kitzi the cat follows. I must look a right sight, the people in my area are used to my ways, it puts a smile on their faces, some look and can’t believe what they are seeing. God love her, she still lays an egg every few days. Lots of children come to see the animals in the garden. They get to pet Star; she is becoming a celebrity. When I go to the country on holidays for a few days, Sally always comes but now Star tags along. She must be the only chicken that has travelled to the country, we went to Kerry, Cork, Rosscarbery, and Waterford. It’s the real good life.

Now a days I have fourteen hens, four roosters, two ducks the cat and dog. Two of the roosters were put in my garden by someone that didn’t want them. They are beautiful “ah’ the colours.” Now at night I have to put all the roosters together in another shed and cover them to dampen down the noise in the early mornings. These animals are the best thing that happened to me in a long time, they give me so much pleasure and happiness in my retirement.

My Trip to Turkey by Alan Roche
Scroll to top