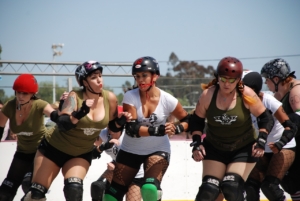 Roller Derby is a high intense contact sport on roller skates. The basic rules of the game are two teams on an oval-shaped track. Each game lasts two minutes and this is called a bout. The two teams have five placers on the track for each bout, one jammer and four blockers. The aim of the game, in short, is when a jammer passes an opposing player on the track, it is a point to their team. The points will rack up fairly quickly if a team has weak blockers and/or a fast jammer on the track.

My first day at ‘fresh meat’ I knew nothing of the rules or the game and was open-eyed and eager to learn. Over the weeks of my induction within fresh meat, I learned basic skating skill stops, stances, skating and rules. Eventually came the contact hits and blocks. It became instantly apparent where my talent lay. I could get low, block and cover track and hit quite hard. I was destined to be a blocker. I grew to love the team’s camaraderie and I was totally addicted to the sport. I kept my training sessions religiously, never failing to attend and progressed substantially week-by-week.

At the time, the team itself was new to Ireland and we were known as the Dublin Roller Girls. The league was renamed Roller Derby Ireland. We, as a team, were learning and ambitious to bout internationally. The World Cup was in our sights! I was excited and eager to be one of the A-Team players, chosen to attend games internationally.

After a number of months came the team assessments. This was my chance to prove myself. We had a written rules test and practical skills. I was placed on the B-Team as an alternate for A-Team players when requested. I was pleased but slightly disappointed as this wasn’t a guarantee to bout internationally. After this at a practice session, I was up against an A-Team Blocker; it was a one to one exercise and the very blocker who got last place above me on the A-Team. I was determined to make the coaches question their decision. But on the curve where the tracks bends, tragedy struck. Our skates interlocked something that should never happen. But I was stuck! No room to move out of her skate and still remain on the track! But then she made her hit which set me free from her skate and straight into the gym room wall!

I was flat-out on the floor sweat poured over me, I knew something dreadful had happened but tor, shocked and thinking I’ll never make the A-Team now. As I tried to get up, I couldn’t without absolutely excruciating pain from my upper body. Thankfully I could still feel and move my arms and legs. The ambulance arrived with astonished faces asking what the hell they were up to in the hall. Derby wasn’t popular at this time. Fully braced up, neck to tail bone, laughing and joking in the back of the ambulance, I was made an eejit of by the ambulance medics, all in jest! We arrived at the hospital.

After a very long wait on wonderful painkillers, the X-Ray revealed my clavicle bone was broken. A minor injury, however, an eight-week recovery period. My only concern was the thought I’d be two months off skates. I would fall in ranking and I would never make it as an A-Team player. Other players were gaining hot on my heels and before I could make it back on the track, they would surpass me!

Week by week with my right arm in a sling, I watched on enviously as other players became fitter and stronger. I took notes of those who were next to take my ranking and helpless to do anything about it. I was slowly becoming out of practice and those on the track where only getting fitter. Then the announcement came. Restructuring of teams and player placement. I had to be back on the track, no question. My collarbone had taken longer to heal than expected. I was in my third month off skates and only started my physiotherapy to gain movement to my right arm; I was stiff due to months of reduced mobility. But there was one goal: I had to keep my spot on the team!

The day came! Against medical advice, I rolled on the track. Little did I expect the flashbacks to come. Oh! how they all flooded back to my mind. The bend of the track – the skate interlocking – the wall and lastly the sound to my inner ear of the CRACK!

My weakened fitness level was apparent. I had to fight to keep up to speed. It was a mental and physical challenge.  Next came the hit assessment. Fully shaking, I rolled into action! My fight or flight response was at full mast…. ATTACK!!

“MY SPOT AS AN ALTERNATE A-TEAM!”

The first hit came from the left-hand side. I withstood the impact.

Ok, I thought, I got this! I stayed low and rolled on. The second hit from the right side. OUCH! I felt it all down my spine. Clear as day, I heard a crack in my inner ear again. NO, NO, NO not again! Third and final hit to my right side, my skate went from under me, and I took a knee and slid to the inner off–track. Head down, tears welled up in my eyes and at that very moment, a single thought struck me. Was the collarbone the straw that broke the camel’s back? Could this have taken me out before something major happened?

I could have broken my neck! Is it the A-Team or walking again?

Is it the A-Team or my life?

I got to my skates slowly rolling to the exit sign. I loosened my helmet and protective armbands and with tears rolling down my cheeks the door slammed shut behind me never to be open again!