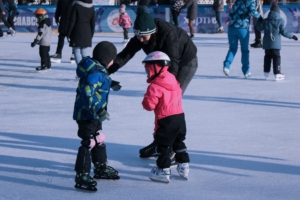 I remember going ice-skating at Phibsboro ice–rink with my friends when we were kids.  We started going on a Saturday, but after a few weeks, I was going three or four nights a week.

There used to be different events on each night at the ice–rink like, ice–hockey, ice–racing and even a disco on ice.  After a few weeks going, I started to get good on the ice.  My balance was great, which meant I was falling on my butt less.

The staff at Phibsboro ice–rink were really nice, I got to know them after a while.  I also used to help out from time–to–time.  That meant I got in for free sometimes which was great.

Most Saturdays they would have a disco on ice at Phibsboro.  They were great nights.  I got to know the DJ, so he would let me pick the tunes that he played on that night.  I also became a bit of a show off on the ice, when I got good.  Some weeks I even played ice hockey with the local team.

In the back of the ice–rink they used to have a mini arcade.  It had about five or six video games.  They were usually games like football, cars or fighting games.  They were 10p in old money and really slow with crap graphics.  Back then, they were great because we knew nothing else.

I sometimes wish Phibsboro ice–rink was open today.  I would definitely bring my kids.  I doubt I could skate the way I used to, but I would give it a go.

Phibsboro Ice-Rink – Fill in the Blanks