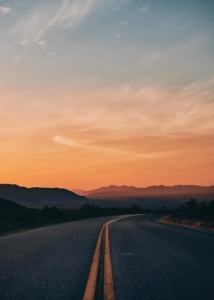 We packed the car checked and double checked that we had everything.  We were going up to my wife’s home place, which is in Castlederg, Co Tyrone.  It is a good 3-hour trip including one stop usually in Monaghan.

Before we set off we said goodbye to the kids and gave them their instructions, ‘be good for your nanny’ etc, etc.  this was the first time in a long time we had left the kids at home, but they clearly told us they didn’t want to come with us.  Anyway my mam had great plans to spoil them rotten.

The journey itself was typical, stopped off at the Applegreen of the M1 at Lusk to fuel up.  I was the passenger because my wife is a much better and patient experienced driver than me.  I played a play list through the Bluetooth system, it always helps pass the journey, especially when it’s music I like.  The weather wasn’t great and seemed to be getting worse the further north we went.  It was also getting dark, as the evenings were drawing in as we were now well into October.  The reason we were heading up is because we were facing a Level 5 lockdown so this could be our last chance to see them for a while.

The weather by the time we pulled into the Circle K in Monaghan was terrible, heavy rain and very strong winds, but nothing we haven’t seen before.  We both got out of the car and went into the Circle K, went to the loo, got a cup of coffee each, which took about 15 minutes.  I did the lotto and also a quick pick, as I am always hearing off garages selling winning tickets, so fingers crossed.

After about 10 minutes outside Monaghan, the roads get a bit more secondary and darker.  I nodded off for about 5 minutes, listening to the music.  I woke up to a banging noise coming from the back off the car.  ‘What’s that noise’, I said to my wife.  She said, ‘that’s that music you’re listening to’.  I turned it down but the banging noise was still there.  ‘Do you hear it now’? ‘I’m trying to concentrate on the road, will you shut up and go back to sleep’.  ‘I’m telling you there is a noise coming from the boot, pull over, something’s up’.  We pulled into a layby off the road.  I took a flash light from the glove box.  My wife said, there was no way she was getting out.  The rain and wind were very strong at this stage and made even walking to the back of the car, difficult.

I opened the boot slowly with one hand on the boot handle, my other hand held the flashlight.  The flashlight was starting to shake in my hand.  I was very nervous as to what the hell was making the noise.  I could really hear it more pronounced now and I could hear a moaning voice now.  I opened the boot and was shocked to find a curled up man, ducked taped up, hands bound and mouth gagged. ‘Jesus’! I shouted to the wife to ‘get out here’.  She came out very reluctantly, ‘what the hell is going on’! ‘There is a bound and gagged man in the boot’. ‘What’s he doing there?’ ‘How the hell do I know?’ I said. ‘How did he get in there?’  It must have been while we stopped at the garage.  ‘Did you lock the door?’ ‘I can’t be sure, stop with the blame game!’ ‘Just take the gag off his mouth and find out what the story is with him’.

We slowly removed the gag from his mouth, he started to talk but was not making any sense.  He was clearly panicked and disorientated.

While we were trying to calm the man down, a bolt of light hit us from an approaching car with full head lights shinning in our faces.  We had to look away from the beams.

For some strange reason, my wife started to dig me in the arm. ‘Ciaran’, she kept digging me in the arm, it was starting to annoy me now, but she kept it up.  ‘Give it over’, I said.  To which she replied, ‘wake up you gobshite, we are at my mam’s house, you have been asleep since Monaghan’.  ‘No way, you’re joking, you have, you were even talking in your sleep’.  I got my head together and finally woke up.  We went into the in laws house and had a cup of tea and a few sambos.  I went out to the car to get our overnight bags.  The first one came out easy, but the bag on the floor of the boot wouldn’t come easy.  I had to yank it as it came out.  I started to fall backwards, I managed to keep my balance with the bag in my hand.  I shined the torch of my phone onto the bag which was hard to remove.  On the bottom of the bag was a big lump of stick duck tape.

Changes within the Year 2020 By Evan

The Covid Pandemic by Angela G
Scroll to top