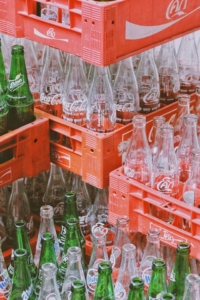 In the area around Croke Park some women were very enterprising. Early Sunday Morning they would make sandwiches and tea and go along the queue of people selling them. Other women would be selling full breakfast and tea for three shillings and six pence. Each woman would have a member of the family with her. When she got a customer the family member would stand in the queue while the customer enjoyed breakfast at the house and used the facilities. In those days I’m talking about, the forties up to nineteen fifty-three people were very orderly and kind to one another and very helpful.

The back gardens of the houses on Jones’s road ran to the back of Croke Park and finished up against the big red stand. They ran from the Hogan Stand up to near the canal end of the park. The roof of the red stand was half moon shaped.

Between the two stands there was a wooden structure that looked like a big box high up on four stilts. It was painted green. That was Michael O’Hehir’s Broadcasting box which I thought didn’t look great. During the broadcast of the All Ireland Michael would pass comment on how many men were on the roof. He just could not understand how they got up there because all the supports of the roof were heavily entwined with barbed wire. He didn’t know there was a long ladder in a back garden behind the stand and men could get onto the roof for two shillings, or that there was bicycle parking in gardens, sixpence for the day.

Just after the start of the second half they would open the gates at the canal end of the ground. My pal Joey and I would go in and collect all the empty bottles. Nearly all these bottles were lemonade bottles made for Taylor Keith. We got money for them, two old pence each for the big ones and one penny each for the small ones. We would bring all the bottles to Lynch’s shop at the top of Russell Avenue. We had so many bottles we could not bring them all at once. Missus Lynch was more than fair to us. She would write down how many bottles we brought, and at the end of the day she would make up what she owed us. We would have a fair idea of how much we should get and Missus Lynch was always spot on with the money. She never tried to take advantage of us. Sometimes we could earn seven pounds ten shillings. Everything was split down the middle between Joey and me. That was a lot of money. In those days our fathers never earned that much for one week’s work. We always gave more than half the money to our parents, they would be so happy. Joey and I made a lot of money from Croke Park.

When the final ended in a draw Joey and I would be jumping up and down with joy. The reason was not just that it meant more bottles, it was the discarded programmes. In those days people did not keep the programmes for souvenirs, they just threw them away. Joey and I would go around the ground gathering them. We would bring them home, and put them in piles on the kitchen table, get my mother’s electric iron and smooth them all out. We would resell them at the replay. We made lots of money from the programmes, I think I can remember four or five replays in those years.

When I look back they were happy days. I love thinking about them because they make me feel so happy.

My New Ambition by Michael