We Will Never Replace Sally by Willie Hyland

We Will Never Replace Sally by Willie Hyland 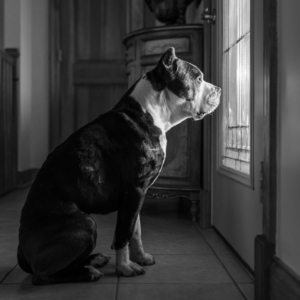 Sally is a year dead and my son kept asking about her so I decided to get a pup for him. It will be the same breed as the last one – a Staffordshire Terrier.

The lad that is getting the dog for me said that the parents only just had pups so they won’t be ready for about 6 weeks. My son, Ross, keeps asking, ‘When are you going to get the pup?’ I asked him does he want a bitch the same as Sally – he replied he didn’t, he wants a dog but I told him that dogs are very aggressive. I’m looking forward to getting the pup for him and I’ve told him it’s a bit of responsibility looking after it.

We’re getting the pup from a chap who lives near Aldi. He used to breed English Bulldogs and Bernese Mountain dogs, but he got rid of them as they kept getting sick on him and dying. The only breed he has now is the Staff.

We got Sally from him and she was 2 months old when we got her. They were going to keep her for themselves, but they went away to live in America and they gave her to me as a present. Sally lived in a cardboard box at the bottom of my daughter’s bed and she would wake my daughter up every morning at 7o’clock even if she’d been out the night before. She was house-trained when we got her. They are very intelligent dogs. Sally was my daughter’s dog and when she got married and moved to Balbriggan, she couldn’t bring the dog with her because the neighbours had cats and Staffs don’t like cats. The dog was given to my son Ross who used to walk her twice a day.

Sally had a bad habit. If she was left out the back for any length of time, she would pull the clothes off the washing line. She wouldn’t eat them: she’d just lie on them. As soon as the back door was opened, she’d run. She’d look at you with her big brown eyes – I’d just give her a slap on the nose.

Ross used to bring her to the fields and she’d roll around in the wet grass. He’d bring her home and dry her with the clean towels and the hair dryer! She’d just stand still for him – she loved it!

There is a family picture that goes around and Sally used to just stare at me in the picture. My son has it left on Sally now. My wife got a picture painted of Sally for my son for Christmas after she died. It’s in his bedroom and he loves it.

I had a carer calling to the house, and Sally used to know where he would sit. As soon as he would go to sit down to fill out his paperwork, she’d sit in his spot. She’d let him know that she didn’t want him there. She loved the grandkids and she loved when my daughter used to call.

Once my daughter got a beagle. She brought the beagle in her arms to my house – Sally was out the back. When my daughter lifted the beagle to say hello to Sally, Sally went bananas and nearly jumped through the glass. I’d never seen her like that as she was really friendly with other dogs out on the street. She was just marking her territory!

The Covid Pandemic by Angela G

Part 2: What Happened
Scroll to top