The End Of The Line by Jack Gilligan.

The End Of The Line by Jack Gilligan. 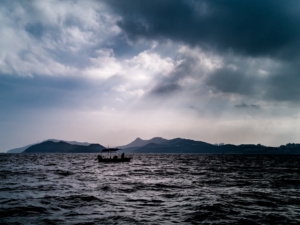 It was a bright sunny morning in the month of June and Tom was preparing his boat, The Mary Anne, for a day’s fishing. His t

wo friends, Peter and Dave, we’re going along with him. Little did he know that this trip was going to change his life with disastrous consequences.

Tom had been a boat owner all his adult life. In the early days, he had three boats which he used to let out for fishing and leisure trips.  It was a life he loved because he loved being out on the open sea.  He was kept very busy between the three boats.  But now, as he was getting older, he found that running the three boats

was becoming too much for him. Nowadays, he had the one boat, The Mary Anne.  He mainly used it for pleasure with just a few trips he hired out to fishing parties.

As Tom was preparing the boat, Peter and Dave came along and got on board.  The three of them went about setting up all their gear for the day’s fishing.  They were looking forward to the trip. It was a beautiful day and the sea was flat calm as they sailed out of the harbour.  They proceeded out to the open sea to the fishing grounds.  They estimated it would take a couple of hours to get to the place they wanted to fish.

When they reached the area, they went about setting up their fishing lines.  The weather was good, but a weather warning was forecasted for later that night. Tom thought that they would be back in port well before the bad weather came.

The fishing in the area they had chosen wasn’t good.  They sailed to a different area which brought them further out to sea than they had intended to go. The fishing in this area was much better. They continued to fish there for a couple of hours while enjoying the food and beers they had brought with them. Tom didn’t have any of the beers as he never drank while being in charge of the boat.

Later on in the evening, it was time to finish fishing and head for port.  As Tom prepared to sail, he found that the engine was very hard to start.  This surprised him as he always kept the engine in good order.  It was always serviced at the proper service intervals. The engine finally started and they set off for home.  But after about thirty minutes they stopped.  They were now drifting further out to sea as an off–shore breeze had come up.  Tom felt certain that he could fix the problem.  After a while, it became apparent that he wasn’t going to get the engine started.

The weather at this stage was deteriorating. The wind was getting stronger and the sea was becoming very rough.  It appeared that the bad weather forecast was coming in early than forecasted.

Tom sent out a radio call to the coast guard informing them of his plight.  All they could do now was to sit tight and wait until help arrived.  The weather was now deteriorating significantly.  The sea was very rough with very high waves. With no engine power, The Mary Anne was at the mercy of the sea.  After a while, the boat started to take in water and the lads worked hard to pump and bail out the water.  But as the weather was getting worse, it became impossible to stop the boat from filling up with water.

Tom and his friends decided to abandon ship.  They launched the life raft.  Peter and Dave got into the life raft first.  Tom was very reluctant to leave the boat as it had been part of his life for so long.  It was only at the insistence of his two friends that he got into the life raft. It was none too soon as The Mary Anne sank beneath the waves soon after.  Tom was devastated as he watched her disappear from sight.  He had no time to dwell on his loss as he had the lives of himself and his two friends to think about.

After hours of being tossed about in very rough seas, they were relieved to see a lifeboat coming to their assistance.  Tom and his friends were glad to be on board the lifeboat and being well looked after by the crew.

On the way back to port, Tom began to reflect on his life as a boat owner.  He was getting too old to start all over again with another boat.  He came to a decision to change his lifestyle.  He would take up shore duties, like helping out in the local yacht club.  Do all the jobs at home he’d been putting off for years.  The door on his life as a boat owner was finally shut never to be opened again.

The End of the Line – Answer the Questions


Town of the Poor by Eugene Harford

The Story of Bang Bang By Angela G
Scroll to top