My Trip to Barcelona by Yvonne Byrne

My Trip to Barcelona by Yvonne Byrne 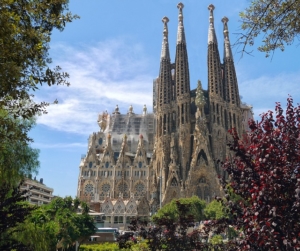 Barcelona is my favourite football team. I watch them on TV all the time. Mum and Dad decided we should go and see them play in their home ground in Camp Nou Stadium in Barcelona.

The Chapecoense team had been flying from Santa Cruz in Bolivia to Medellin in Columbia. They meant to refuel in Cobija (Bolivia) but when they got there the airport was closed. The plane continued on to Medellin and warned the airport they were low on fuel. However, the airport gave priority to another plane which also had fuel problems. The Chapecoense plane crashed killing 71 of the 77 people on board. The plane’s fuel tanks were completely empty. Only 3 team members and 3 other passengers survived.

My Mum booked the tickets on the computer. We flew from Dublin to Alicante to stay for a day or two in an apartment in Torreviejo on the Costa Blanca. This resort has beautiful beaches and lots of bars and restaurants. I have been there a good few times. It has a water park, salt lagoons, nature parks, a walk along the breakwater, a submarine museum, water sports and boat trips available at the harbour. It also has a long nature walk along a disused railway track.

Our apartment was only a few minutes walk from the beach. That night we had a lovely meal in a local restaurant. Later, we flew from Alicante to Barcelona and booked into our hotel in the city. We met Irish friends who now live in Barcelona. They showed us around. Afterwards we took a “hop on hop off” sightseeing tour. Barcelona is famous for buildings designed by Antoni Gaudi, a Spanish architect, who died in 1926.

* La Rambla (a pedestrianised street full of shops, restaurants and performing artists), and,

* The Magic Fountain of Montjuic where the water changes colour to lights and music. There is also a cable car at Montjuic giving fabulous views of Barcelona city, but it was not operating that day.

The next day we got a train to the Camp Nou Stadium, Barcelona’s home ground. This holds 99,000 people. It is the largest stadium in Europe and the second largest in the world. It is also used as a venue for concerts and other events. Pope John Paul, Julio Inglesias, Bruce Springsteen, Michael Jackson, Sting, Pavarotti and U2 all appeared there. The stadium has a souvenir shop and a museum.

Our seats were in the open air and it was a very hot day. We all put suncream on. It was exciting when the teams came out. Barcelona wore dark blue with red and Chapecoense wore white. Barcelona won 5-0. I was delighted to see all my favourite players in the flesh. The three surviving team members from the crash were introduced at the start of the match.

After the match we went back to the city to have a lovely meal. We flew home the next day. I can’t wait to go back to Spain again.

Worksheet 1: My Trip to Barcelona

2. What is their home ground?

3. What happened to the Chapecoense team?

4. What attractions are there in Torreviejo?

6. What did Yvonne and her family see in Barcelona?

7. Where is a largest football stadium in Europe?

Worksheet 2: My Trip to Barcelona

Write sentences to include the following words:-

Use any of the letters in the words below to make new words. Make three new words in each case.

The Artane Hub by Dina McAnaspie
Scroll to top