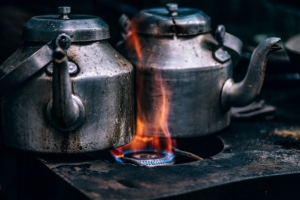 I remember one summer day, my mother and a group of neighbours were talking about the war. They were very concerned. My mother called me over and asked me to go to the corner shop and ask Michael O’Connor how the war was going in Europe. Michael had a radio – not everyone did. I came back from Michael with the news that France had surrendered. The ladies were shocked. The war never reached our shores except for the bombing in the North Strand but it affected us in many ways.

There were severe restrictions on the use of gas. The Gas Company controlled the flow to each house. From seven a.m. each morning we had a full flow until about nine o’clock, then it was turned off. It was turned on again from about twelve until two p.m. The same thing occurred again from about five until seven in the evening. In between these times there was no flow but if you tried to light your gas you would get a glimmer, a very low flame. This was strictly forbidden and very dangerous but some people did it anyway. The glimmer could die back into the pipes as there was no pressure and cause an explosion.

There were men employed by the Gas Company to call on houses to check if anyone was using the glimmer. They became known as “Glimmer Men”. The glimmer man could come into your house to check your gas rings for heat. You could be fined or if you did it repeatedly you could be cut off. People were very scared of the glimmer man. As soon as he visited a house, someone would go around the street warning all the neighbours that he was on the prowl. Women would keep a damp cloth by the stove to cool the gas ring if they had been using the glimmer so they could fool the glimmer man.

Gas was severely restricted. Fuel was almost non-existent and cooking and heating water was very difficult. As the war went on, people became more resourceful and found other ways of managing. We made sawdust fires. What a piece of engineering this was! Sawdust fires consisted of a five gallon drum with a two or three inch hole in the bottom, placed on two house bricks. A pole, that would suit the diameter of the hole, would be placed in the centre of the drum. Lightly dampened sawdust was packed tightly into the drum right to the top. The pole was then eased out slowly, leaving a hole in the sawdust from top to bottom. A newspaper would be lit and put underneath the drum. The sawdust would light quickly and burn with a steady, even flame. A grid or steel frame would be placed on top of the drum to hold pots, buckets and other cooking utensils. In my younger days, every family had a sawdust fire in their backyard and cooked on them.

This wordsearch works well on some devices and not others.

You can also use the plain version at the end. 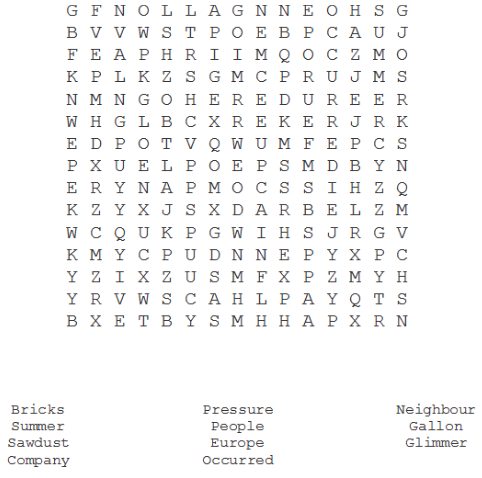 My Trip to Barcelona by Yvonne Byrne
Scroll to top