My Grandfather The Steamroller Driver by Thomas Pentony

My Grandfather The Steamroller Driver by Thomas Pentony 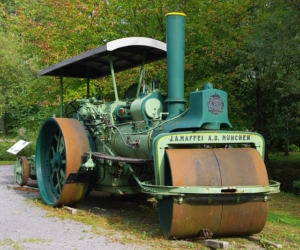 When I lived in Drogheda as a young boy, we would watch the Corporation men repair the roads and finish it off with a steamroller. I learned from my father that my grandfather who had since died I never got to know him drove that steamroller from then North wall in Dublin to Drogheda when it arrived by boat from England.

He was a man I would love to have gotten to know. The more I learned about him the more he reminded me of myself. We were both interested in anything mechanical and how it worked.

He was born 1879 in St. Marys Hospital Drogheda Co Louth and when he was young boy, the family moved to live in Ushers Quay in Dublin. He lived there until he got married. He then went to live in Rialto where they had four children, three sons and a daughter. He moved back to live in an area called Mell in Drogheda in the late 1920s where he was employed by the then country council as an engine driver.

When the council purchased a new steamroller from England, it was his job to get it from Dublin to Drogheda and with a top speed of 2 miles per hour; it was a major task in itself. There were four men involved in getting the steamroller home. They set up relay stations with coal and water between Drogheda and Dublin. They had a man on a bicycle to check that the water and coal was there for them.

Some words sound the same but have different spelling and meanings.

My Dog Star by James Murphy

A Little About Me by Lisa O’Leary
Scroll to top