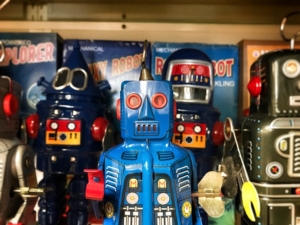 One of the first memories as a child is when my brother worked in a shop in Dublin city centre called Hector Grey’s.  It would be a cheap branded shop, kind of like Euro Giant or Mr Price is today.  I loved it

when he worked there because every few days he would bring me and my sister home a small surprise.  It was usually a small toy or something for school.  It was only something small but we used to be so happy.

I remember getting my first digital watch.  It was amazing to me at the time because it used to beep twice every hour and it had a light on it.  I thought I was so cool wearing it.

My brother also brought me home my first Cadbury cream egg from Hector Grey’s, it was delicious.  Sometimes I could make them last a half hour.  He used to bring one home every week.  Back then cream eggs were a luxury, not like now.

Some weeks my brother would bring me into Hector Grey’s and show me around the shop.  I got to go into the stock room, which was upstairs in the shop and that was where most of the toys were kept.  I used to love going up to the stock room.  There were so many different toys like dinky cars, model aeroplanes, toy soldiers and loads of art stuff.  They also sold household stuff like ornaments and lamps and even stuff for the garden at times.

I used to be so looking forward to my visit Hector Grey’s.  And there was always a bargain to be had.


My Cinema Memories By Joe B