The Fairview Cinema by Liam Tighe 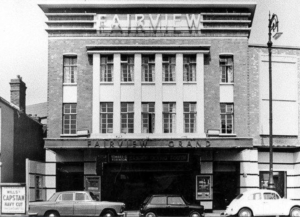 These are some of my memories from going to the cinema in the late 60’s and early 70’s.  I lived in Coolock. We all used to head down to the Fairview House Cinema, which was a good distance from Coolock. We got the 27 or the 27B double decker bus and had a great time.  The film started at three.  We were nearly always there for about 2o’clock.  The queues to get into the cinema were huge.  The sort of films we watched were very good – Laurel and Hardy, The Three Stooges and another film we loved was Errol Flynn.  It was an all-action film.

My best memories were queueing to get into the cinema.  There were always queues. Loads of people from all areas used to come to the Fairview Cinema on a Sunday afternoon. When we got through we used to head upstairs because it was the safest place to be.  At that time smoking was allowed in cinemas.  If you went down underneath the young ones and young fellas used to buy cigarettes loose.  They were called butts, when they were finished with them, they would flick them down into the people underneath.  They thought this was very funny.  Then the ushers went around with their torches shining up and to see where the butts came from.

Another thing I used to remember about the cinema in Fairview was their big red curtain over the screen.  When the film started the curtain just pulled back, it was very dramatic.  There was a break halfway through the film when people went around selling ice creams and popcorn, not that you had the money to buy anything.  But those days were great and the journey home was even better. God knows what trouble we got into going home.  We used to end up walking home because we never had enough money for to get the bus.  Sometimes the bus would not let us on because there were too many of us.  I am glad I got to tell you my story and I hope you liked it.

The Lockdown Announcement – Podcast by Mary L.
Scroll to top