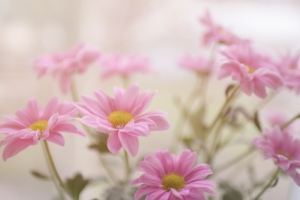 Three weeks ago, I got up on a Sunday morning to find a beautiful bunch of yellow and pink flowers on the kitchen table.  My husband said, “The postman delivered those flowers”.  My son was in the garage when my husband shouted out, “Didn’t the postman bring those flowers”?  Michael, my son replied, “Yes”.  There was no note with the flowers, so it was a mystery who sent them.

Two days later, my daughter, Joann said to me, “Did you like the flowers?”  She was surprised that I didn’t ring her when I got the flowers.  I said, “Daddy told me the postman delivered the flowers so I thought they were from him!”  Joann said, “No Michael was in the garage with the door open when I left them there.  I asked him to give them to you”.  Joann had got me the beautiful bunch of flowers to cheer me up.  Three weeks later some of the flowers are still alive and are keeping me cheerful.  The roses are still fabulous to look at.  When I look at them, I think about my husband and my son tricking me and it makes me smile.

Exercise 2 – Fill in the Blanks

The Story of Bang Bang By Angela G