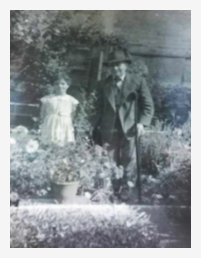 I am writing about Patrick Connolly who was my Grandad. He was born on 1st of May, 1873, in Castledermot, Co. Kildare. He was the son of Daniel Connolly and Hanora Fennell.

Patrick worked as a gardener which meant that the family moved around Dublin, initially living on the Southside and finally living in East Wall, where my mother was born. I didn’t know my Grandmother very well as she died in 1950 when I was four.

My Grandad continued to live in the same house until his death in 1965. I have very happy memories of my Grandad. I went down to visit him after school to give him his dinner as he was confined to bed with arthritis. He would ask me to get his “deed box”, which was an old cigar box and in it was references from all of the places he worked.

They said that he was honest, hardworking and sober. He was a very good gardener. Unfortunately, I didn’t inherit his green fingers!

Who wrote this story?

Where was the author’s grandfather born?

How many years apart did the author’s grandparents die?

What was in her grandfather’s “deed box”?

Why do you think he liked to look through its contents?

Is the author a good gardener like her grandfather? Why do you think this?